A ‘low risk’ approach to façades on high-rise buildings

The ICM are always pleased to recommend good industry CPD - Phase 1 of the sad Grenfell Inquiry has ended - and ongoing Phase 2 is even sadder - but is now delayed due to a member of the Panel testing positive to COVID-19 so the Hearing is now deferred until 11 January 2021 but the Met. Police investigation is ongoing and, some of the latest revelations wouldn't have gone unnoticed that's for sure! ...

... this timely short free module sponsored by Rockwool, looks at what the industry needs to understand in terms of a product’s combustibility rating and how clients, designers and contractors can achieve ‘lower-risk’ options in façades ...

LINK TO THE MODULE BY CLICKING HERE

Approved Document B [ADBv2] provides guidance regarding fire safety measures required in buildings and the influence of those on the choice of materials used when constructing a building.   In using any Approved Document professionals MUST be competent to make own reasoned choices based on skills, knowledge and, experience if their competence suggests the published guidance is insufficient to manage the assessed documented risks ...

A prime example would be the choice of insulation to be incorporated into buildings over 18m high, for example apartment developments and High Rise Residential Buildings [HRRBs] ...

At present, the potential ambiguity of the Approved Document ADBv2 is the subject of much discussion [relevant to but not part of this article!] – in particular, the guidance provided in section 12 relating to the fire resistance of external walls. However, there is clarity in respect of the fire safety of high-rise building façades, which is provided in section 12.5: “The external envelope of a building should not provide a medium for fire spread if it is likely to be a risk to health or safety. The use of combustible materials in the cladding system and extensive cavities may present such a risk in tall buildings.” ...

... until the ambiguity in ADBv2 is resolved and any published guidance is clarified and understood, logic suggests the rules of risk management published by the HSE must be followed by any technical designer. 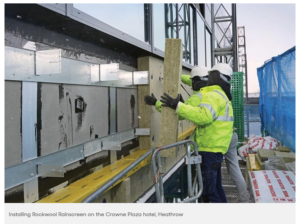 The principles were well articulated by Michael Mansfield QC when he said in his Closing Statement to the Grenfell Inquiry when he closed Phase 1 "we've heard enough - action should be taken to save lives NOW! - not wait until the Inquiry concludes" and he urged Judge Moore-Bick to make an interim statement limiting "nothing less than A1 until the sector designers get a competent grip and understand the problems!" 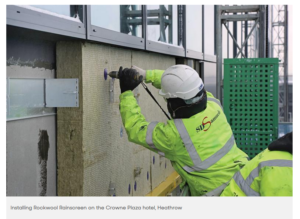 We've heard enough - action should be taken to save lives NOW!

According to the records at end of 2018, there are 457 high-rise [over 18 metres] residential buildings and publicly-owned buildings in England with aluminium composite material [ACM] cladding systems – similar to that used on Grenfell Tower – unlikely to meet current Building Regulations guidance.

► Of these, urgent remediation work has been completed on just 8.5%.

► Of the 457 high-rise buildings, 157 are social sector residential buildings, managed by local authorities or housing associations; and 291 are private sector buildings – of which 201 are private residential, 28 are hotels, and 62 are student accommodation.

► There are approximately 30 private sector residential buildings where the cladding status is still to be confirmed – this has fallen from approximately 170 buildings in June.

► 22 of the 157 social sector buildings (14%) have finished remediation – and a further 98 buildings (62%) have started the process of remediation.

► There are 40 buildings where building owners intend to remediate and plans are being developed. Remediation plans remain unclear for 121 buildings – although this number has decreased from more than 200 in June.

► Of the nine publicly-owned buildings (hospitals/schools), remediation work has started on one of them, there is a plan in place for four but plans for the other four still remain unclear.

The ministry’s Building Safety Programme, set up following the 14 June 2017 Grenfell Tower fire, stresses that the remediation of buildings with unsafe ACM cladding systems is a complex process.

Explaining the slow progress, it says: “Remediation work involves addressing any issues with the exterior cladding system and broader fire safety systems for each building ... all of this work takes time and varies considerably depending on the building structure, extent of cladding, and existing fire safety systems ... for many buildings this is a complex job involving major construction work which needs to be planned, consulted on and carried out carefully.”

David Jones ICM's Director of Education and Training agrees with Michael Mansfield QC when he says "we cannot afford another Grenfell" ~ Mansfield QC has called on Judge Moore-Bick to consider what can be done NOW! and make an Interim Report urging for a temporary moratorium to limit insulation to Class A1 only on the HRRBs ... 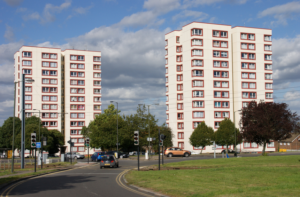 David Jones is able to call upon own personal hands-on design experience when he was commissioned by Croydon LB in 1998 to design overcladding solutions to their high rise residential tower blocks and, into which David also incorporated his patent Gravity Opening Smoke Vent [GOVs] - a unique inventive step beyond the traditional Automatic Opening Vent [AOVs] - currently creating further inventive steps too for a new Smart Opening Vent™ [SOVs] ... all of those Croydon HRRBs passed the Fire Test and assessment undertaken by the BRE post-Grenfell ~ David Jones comments "whilst I am personally proud of the achievement to have designed and specified successful design solutions I am sad angry and certainly not proud that standards and competence in parts of my construction sector has fallen to a new low!"

The case for an IMMEDIATE TEMPORARY MORATORIUM argues Mansfield QC ~

"nothing less than A1 until the sector designers get a competent grip and understand the problems!"

David Jones is closely following the current ongoing professional post-Grenfell 'debate' as it unfolds - Phase 1 of the Grenfell Inquiry has now ended in 2018 -[the Grenfell Tower Inquiry is an independent public inquiry, set up to examine the circumstances leading up to and surrounding the fire at Grenfell Tower on 14 June 2017]- Phase 1 focused entirely on the factual narrative of the events of the night of 14 June 2017 specifically and in extreme forensic detail provided by UK leading experts examined by some of the UK's best lawyers and included:

► the existing fire safety and prevention measures at Grenfell Tower;

► where and how the fire started;

► the development of the fire and smoke;

► how the fire and smoke spread from its original seat to other parts of the building;

► the chain of events before the decision was made that there was no further savable life in the building; and

► the evacuation of residents

Phase 2 has commenced addressing the remainder of the List of Issues to be investigated.

David Jones notes that the List of Issues was drawn up on 4th June 2018 and is intended as a guide to the issues on which the Inquiry’s investigations will focus.  It is not a prescriptive list and is not to be understood as a pleading or statement of case.  The Inquiry’s investigations are currently uncovering need to address further issues within its terms of reference but not contained in this list. Accordingly, the issues in this list may be subject to revision during the course of the Inquiry ...

In broad terms, the technical debate now is around the choice of materials that were selected for the new external cladding to be fixed onto the outside of the existing building and how those decisions were arrived at ─ recent revelations given under oral evidence only [oral evidence was 'protected' by the Attorney General from being used to incriminate in later prosecution at the start of Phase 2] are quite extraordinary ─ throwing the routes to compliance in complete disarray!

Technical designers currently active in the sector but  unconnected with the Inquiry argue the Approved Documents are [or can be] used prescriptively.

"This document is one of a series that has been approved and issued by the Secretary of State for the purpose of providing practical guidance with respect to the requirements of Schedule 1 to and Regulation 7 of the Building Regulations 2010 (SI 2010/2214) for England and Wales.  The Approved Documents are intended to provide guidance for some of the more common building situations. However, there may well be alternative ways of achieving compliance with the requirements.   Thus there is no obligation to adopt any particular solution contained in an Approved Document if you prefer to meet the relevant requirement in some other way"

David Jones understands the way the sector operates from his own lengthy professional career  - accepting designers do carry a heavy burden and exposure to professional liability for the designs they create.   In operating under that heavy burden to 'get it right' most designers will cover their liability through Professional Indemnity Insurance - some don't! - but those who do will understandably seek to maintain insurance premiums as low as possible.    Limiting exposure to liability by prescriptively adopting the solutions contained in an Approved Document may work in some cases but not all.    Many design practitioners do rely on the certification by the British Board of Agrément [BBA].   This approach they  consider is prudent by creating third party support.    The BBA issues product certificates without need for full disclosure of test reports which does create difficulty for designers who rigidly stick to the BBA relying on it as though it's prescriptive in every case - which, of course, it isn't!

In giving evidence to the Grenfell Inquiry Phase 1, expert witness Dr. Lane confirmed in her statement @ 010.1.24  "I know from my professional experience before the Grenfell Tower fire that none of this test evidence would have been available in the public domain, so the analysis I have presented here could not have been done by others relying on the BBA certificate"

The British Board of Agrément [BBA] is a construction industry approvals body, originally set up in 1966 by government and offering product and installer approval.  Agrément certificates cover 200 different product sectors and the largest of these are insulation and roofing. In insulation the BBA has run an Approved Installer Scheme for more than thirty years, linking installations of injected cavity wall insulation to BBA approval of the systems and dealing with both the system supplier and installer. BBA approvals show compliance with Building Regulations and other requirements, including installation quality. The BBA consists of three main operations, Product Approval and Certification, Inspection and Test Services. Ownership of the BBA is held by its Governing Board, consisting of three executive and four non-executive directors.

David Jones points out that Dr. Lane has been very clear in her expert viewpoint about the suitability of current certification systems ... this underlies the questions she raises in her evidence @ 11.2.25 “For the avoidance of doubt I consider an external surface formed with a composite of a polyethylene core to be unable to comply with the functional requirement of B(4)1 of the Building Regulations.  I am concerned therefore about the provisions made in Diagram 40 of AD B 2013 which is statutory guidance and advise these are changed as soon as possible.”

Ambiguity and conflicts in the guidance contained in ADBv2 does render it an unsound process for anyone to place absolute reliance in that published guidance for the purpose of selecting insulation for the external envelope of a building and fully supports Michael Mansfield QC in his call for an immediate moratorium limiting "nothing less than A1 until the sector designers get a competent grip and understand the problems!" and David Jones adds " ... those who select and specify insulation products to be used in the external envelope of any residential building should possess appropriate skill, knowledge and expertise to be able to make any choice other than classified 'Non-Combustible' Class A1 "

"We believe that using non-combustible building products wherever possible is the most straightforward way of designing out risk and ultimately meeting the requirements of Building Regulations."